I’ve thought occasionally about writing about projects, but I’m not sure. Mostly, this is because I don’t want to be making things purely to turn into Projects. I’d rather bring things that I’ve made for a reason. So, I shall continue to post about experiments and practice attempts, as well as occasional Projects, because whatever it is turned out fine.

Besides, mostly I use magazine freebie stamp and die sets.

Having said that, the last card I made was a just because card. I was messing in my craft-room, playing around with stamps, and thought that I’d make a little notelet card. I don’t much like making big cards yet – there’s too much space! You’d think I’d be better with large card sizes – my day-job is proofing large print, which is often on A3. 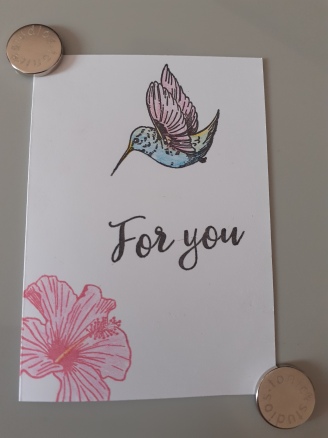 This was made with an A6 piece of white card folded in half, and the stamps came with issue 205 of Simply Cards & Papercraft. It had a Totally Tropical stamp and die set, which I haven’t used very much yet.

I like the size. It’s just right for being the sort of card that can be tucked into a parcel or gift-bag, and it only took about 5 minutes to stamp and colour. The only annoying thing is that A6 isn’t quite 15 cm (or even 6”) long, so I had to be careful with scoring the half-way fold.

Even better, the easily available 6″ square papers are the right size to be turning into envelopes for this size card. I had thought I’d be using a double-sided piece, and would need a sticker-label to write the direction, but the piece I picked up to test the theory was one-sided. So it’s an envelope with a patterned inside.

Perhaps there’ll be more of these, as I get the hang of crafting around my work-computer.