Well, what’ll you know? That thing I said the other day, about setting up my craft room in time to turn it back into an office?

It started with half a week of training – allowed under furlough rules, apparently – and then became back to work proper, although continuing from home. So my craft-room has been partially dismantled and returned to being an office. 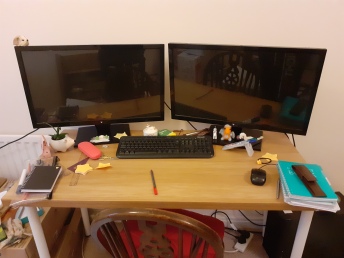 On the one hand, of course, it does mean that I might end up with a larger selection of fun words from which to choose my monthly offering.

But, on the other, I have now lost a large chunk of my lovely crafting space again. And some of my crafting/reading time. Grumble grump. I shall have to rethink those plans I had and re-imagine my craft room around my office-desk. It’s much easier when the computer is a laptop. Sigh. At least I don’t have the commute again just yet, so I still have that time.

It’s probably also a good way to get back into the swing of working and doing my actual job again. Oh well! It’s been a lovely few months.

As we move out of the quarantine restrictions, some of the following may come in useful:

Drumble – to move in a slow, sluggish way

Pickthank – one who curries favour with another, especially by informing against someone else; a flatterer, a sycophant; a telltale

And, for all those who have been taking this time at home to experiment more in the kitchen:

Anethated – prepared or flavoured with dill