One of the few things I dislike about being at home all the time is that I have to go in search of my own new words. I have to remember to check out the OED’s recently published lists.

In the office, it’s one of the first things I do. And my proofer colleagues bring words they’ve come across to the Words of the Week board. I wonder if we remembered to clean it when we left the office (I was one of the first out, so it was still covered in words when I left).

Not having to sit at my desk and turn my computer on at a particular time, though, I’ve got out of the routine, and my Book of Words has suffered. It’s also suffered from only having the OED as its source of new words. 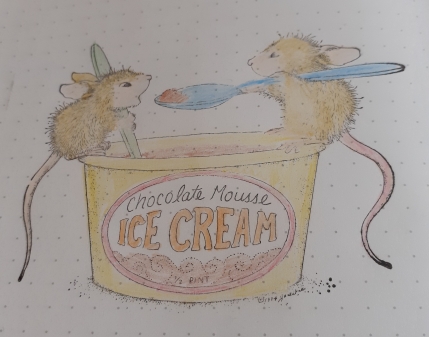 However, I have still managed to gather a few words which rather tickled my fancy.

Macaronic – a jumble or medley

To wuzzle – to socialise, to mingle

[The mice are because they are wuzzling, at a safe, ruly distance. For mice. I don’t think they need a two-metre gap, although they probably shouldn’t be sharing spoons.]

Post-script: I originally wrote this a week or two ago.

Clearly, we are not all ruly people. In the last day or so, a friend sent me the following word:

Mumpsimus – a notion obstinately clung to in spite of clear evidence that it is wrong. This can also be applied to people, who cling to old ways even though they have been shown to be wrong.

Never mind “covidiot” (which I must admit is one of the better portmanteaus of recent years), I think mumpsimus (pl. mumpsimuses) should be used more often in everyday situations.

8 thoughts on “Notes From My Office: May’s Words”