Having decided to start actually using the patterns in the magazines I buy, I began with this clock-face from World of Cross Stitch. 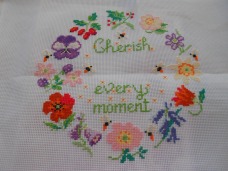 It’s easy to say “Cherish every moment”, but it’s an entirely different matter to do it. It’s the sort of thing which takes practice and a lot of pretending in the beginning, but I imagine that eventually, with enough practice and pretence, it might become second-nature. But it might take a while.

One of the things I like about crafting is that, generally speaking, it isn’t a fast process. Projects take time, and you can’t really rush them, not even little ones.

I enjoyed stitching this, which tells me that I might have been too quick to dismiss the pretty patterns with long lists of threads. At present, this is a (stopped) clock. For some reason the hands didn’t really take – they kept catching and getting stuck – and the battery didn’t last as long as I’d expected, so, at some point, I’m going to stitch or cut out a butterfly shape (or maybe another bee) to go in the centre, and have it merely as a picture.

A reminder to slow down, to be patient and enjoy the now.