Since I have so many recipe books for treats and chocolates, every so often, I test similar sorts of recipes, in sporadic attempts to find the best, the definitive, recipe. Or the best of the ones which I have in my books. Admittedly this first test isn’t a particularly fair one, since I’m testing a simple fudge against a “proper” fudge (as in, one that needs me to use a sugar thermometer), but that’s part of the point. Do simple fudge recipes hold their own against traditional fudges?

So first of all, having made sure I have condensed, not evaporated, milk, I pour and splosh the milk, chocolate and butter into a pan to melt together over hot water. It calls itself “Chocolate Sort-of-no-Cook Fudge”. It comes from Miss Hope’s Chocolate Box, as does the “proper” fudge I’ll test next time. It’s the sort of recipe you can use with children, since it is just about melting and mixing, and you don’t have to watch the mercury rise with an eagle eye. It is, in fact, very simple. 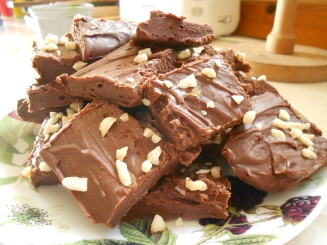 The last time I made one of these simple fudges I stored the recipe away under “Fudge Icing”. It didn’t set, you see. Not even with considerably more chocolate than the pound the recipe had wanted. It just didn’t work. So I’m largely sceptical about simple fudge recipes. But we shall see.

Once it’s all melted together and smooth, it gets poured out onto a tin covered in cling film; I couldn’t find either baking paper or tin foil.

I changed the suggested Smarties topping to chopped nuts, because they’re what I had in the cupboard, and I wasn’t making these with children. I think even Willy Wonka drew the line at using children in his recipes.

Verdict: This isn’t a crumbly fudge recipe, but they are very moreish. A bit like a soft toffee caramel. Definitely a recipe for when you want fudge now. Well, in about an hour, depending on where you leave them to set.